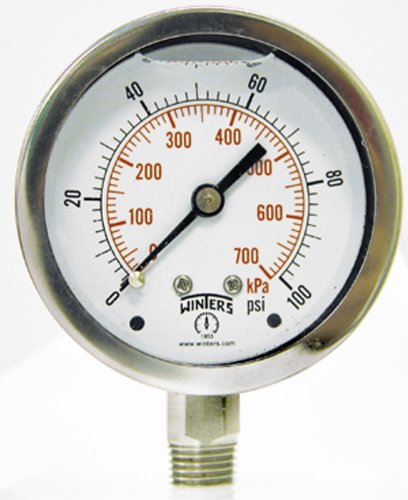 The Winters PFQ series pressure gauge with stainless steel wetted parts has a glycerin-filled circular dial enclosed in a stainless steel 304 case, and a male connection, and measures pressure with a single or dual scale with an accuracy of + or - 1.5% or 2.5%. The stainless steel wetted parts provide corrosion resistance. The stainless steel 304 case is also corrosion resistant and is Ingress Protection certified IP65 for protection against solid objects, including dust or liquids. The circular dial comes in 1.5" (40 mm), 2" (50 mm), 2.5" (63 mm), or 4" (100 mm) diameters and is filled with glycerin for protection against vibration and pulsation. The dial is white aluminum with black and red markings. It has an aluminum, anodized black, pointer and the lens is polycarbonate for high impact resistance. The gauge measures pressure with a single psi or Hg. vacuum scale or a dual scale of psi/kPa or Hg. vacuum/kPa. The gauge is accurate to + or - 2.5% of full scale value for the 1.5" and 2" dials and accurate to + or - 1.5% of full scale value for the 2.5" and 4" dials. The male connection is 1/8", 1/4", or 1/2" NPT (National Pipe Thread) rate with a restricted orifice and is located at the bottom or center back of the gauge. The movement is stainless steel, and the welding is tungsten inert gas (TIG) for strength. The 6" (150 mm) socket gasket, the fill plug, and the lens ring gasket are all made of nitrile rubber for a tight seal. The over-pressure limit is 25% for pressures up to 1,400psi (9,653kPa) and 15% for pressures over 1,400psi (9,653kPa). The working pressure is a maximum of 75% of full scale value. The operating temperature is -4 to 150 degrees F (-20 to 65 degrees C). This pressure gauge is suitable for pumps, compressors, hydraulic presses, machinery, pneumatic equipment, and motors in harsh environments.

"li"Ideal for pumps, compressors, hydraulic presses, machinery, pneumatic equipment and motors in harsh environments "li"Use where harmful vibration and pulsation are present "li"Not for use on potable water